The Kingdom Hearts Manga Wiki has its own IRC Channel!
To use, type #wikia-khmanga into the second box.

March 6, 2010 - The Votes for Monthly Poll page is now open for nominations!

The current goal of this wiki is to obtain 25 articles and 10 pages of high quality (at least as good as the Xehanort's Heartless or Sora page).
We'll need all the help we can get!
Currently, the project is filling up the wiki with Character articles!
Be sure to categorize the article under Category:Characters.

Contribute to this Wiki

To write a new article, just enter the article title in the box below.

Not sure where to start?

There are two kinds of articles that need major help: "Stubs" and "Wanted Articles". However, because we don't like stubs here, we use the term Articles in Need of Expansion instead.

Need any help? Our Staff would be more than happy to help out.

So get in there and start editing! 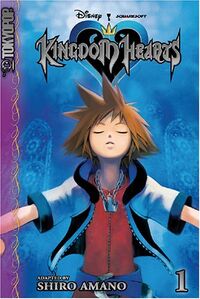 Kingdom Hearts is a series of manga that was the first released based off the hit role playing game series Kingdom Hearts. It was released in four volumes, and translated for an English speaking audience by TOKYOPOP. It was originally written and drawn Shiro Amano, but based off the concept by Tetsuya Nomura. Unlike most manga, it was made to read from left to right, though this was later changed in the following series.

Retrieved from "https://kingdomheartsmanga.fandom.com/wiki/Kingdom_Hearts_Manga_Wiki?oldid=4136"
Community content is available under CC-BY-SA unless otherwise noted.